But who cares about who made the game? or on where it might end up in the end?  And so, for today’s question, “Can Arkham Origins exceed its predecessors, can Warner Bros. create wonders than Rocksteady, and can the game reach the expectations of a Next-gen game?” Let’s see…

Batman: Arkham Origins planned to be a prequel for Arkham Asylum and based on the DC Comics superhero Batman, it is the successor for the 2011 video game Batman: Arkham City released by Warner Bros. for the PlayStation 3, Wii U and Xbox 360, Windows worldwide on October 25, 2013.

A companion game, Batman: Arkham Origins Blackgate, was released alongside Arkham Origins for Nintendo 3DS and PlayStation Vita. A spin-off game of the same name for iOS and Android platforms has also been released.

The game’s main storyline is set five years before that of 2009’s Batman: Arkham Asylum, and follows a younger and less refined Batman who has a bounty placed on his head by a crime lord named “Black Mask”, by drawing eight of the world’s greatest assassins to Gotham City on Christmas Eve to assassinate Batman.

This is an amazing plot with good narration and heavy twists. I think I spoiled the story… or did I? find out for yourselves.

In this game Batman is presented more brutal and merciless, making him more awesome. He hates the cops of Gotham (old time ones) as they are all are filled with corruption. And so, no mercy even for a cop. Batman fighting style is more brutal than the previous ones using his knees, breaking every one jaws (BAAM! So cool!).

The character is represented by top notch voice acting. Batman can’t be described in two words, so leaving this, lets lead to other characters

The main characters of the story line are Alfred (Batman’s butler), Bane, Black Mask, Catwoman (Only in DS and Vita), Copperhead, Deadshot, Deathstroke, Electrocutioner, Firefly, Harley Quinzel, Killer Croc, Penguin, Enigma (Riddler type), Shiva and many minions. I felt disappointed as they missed some core characters like Mr. Freeze, Ivy, Scarecrow as this is supposed to be origins, but anyway its fine. These amount of characters are more than enough.

Though from my notice, I have to say, I felt Deathstroke as the most interesting one in this line-up as he is cool and cold as Batman.

Hmmm… This game is

The game is presented from the third-person perspective with a primary focus on Batman’s combat, stealth abilities, detective skills, and gadgets that can be used in both combat and exploration. Origins is the first game in its series to feature multiplayer gameplay.

The gameplay isn’t anything special as it is the same as Arkham City, with better battle animations and a bigger map. I don’t know why Warner Bros. added such a big roamable map as travelling now takes more time. Instead they should have added reduced the map, or should have given us the Batwing or something.

To conclude Arkham Origins has slight improved graphics, and that’s it for the gameplay!.

I don’t see the difference…

Batman: Arkham Origins is facing similar troubles as Arkham City, but they improved game’s graphics and revamped the whole map and changed batman’s fighting schematics. They have also added many characters in which Deathstroke and some are playable through DLC or in some way or another.

But instead of these changes, everything is the same as Arkham City (Arkham City also had the same problem with Asylum but they kinda improved the game to a whole new level). Now the Map is too big to roam through grapple hooks, and the map has no life to it (Big map with only criminals, I don’t know what’s the population rate there as there should have been at least some innocents scrambled around). The fighting system is slightly revamped that now “Batman uses Knees brutally”. The graphics have also been improved!

Now Honestly, I didn’t feel difference between Arkham City and Origins, for that I even tried it on PC to check out the difference, but no, the game was bad in-terms of optimization too, I couldn’t even find the ultra-graphics options to change (There is are options).

Bad/previous navigation system with glitches, sometimes I couldn’t even find where I have to go, it just show just green notification on top bar, and following that I faced some great/irritating glitches that I had to restart the game (no improvement here/same system as Arkham City).

Not to complain that the game is bad but AAA titles I guess need to have big improvements, not slight ones that you buy the same game again. For at least they need to be better optimized if nothing else.

For the graphics part in the trailers they showed some bullshit like Deadshot was shooting bullets and batman was facing Deathstroke and the both assassins fail and Batman escapes from them, like, REALLY?!?! I didn’t even face Deadshot and some characters shown in the trailer. I completed the game in less than 1 day and just as the story was picking up some pace, the game abruptly ended (The story was pretty intense but it ended in an unexpected way in which I was wondering whether “what do I have to do next? Is that it?”).

Not to complain as, this is the best story plot I ever saw in the superhero titles and the gameplay pace was also intense… I guess Next-gen version of game may more gameplay options and somewhat additional story? (I highly doubt that).

Don’t forget that this is a Batman Game 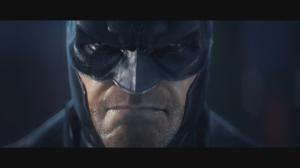 The most important/fun factor thing in this game is that, when you progress through the story, the cut scenes, and the boss battles, everything feels intense and rather amusing,  you forget everything and you fully emerge yourselves into the game (especially the Deathstroke fights).

The story has been narrated flawlessly, but it needed more content. All I can say is that batman fans will be really happy by seeing this type of story in the game (I was). and finally i liked the new voice actor as I  diddn’t even feel a difference despite him being the new guy, he felt appropriate.

Now as far as cons go:

Finally I’d like to leave you guys on a final note, guys this review is not based on rating I give, it’s about your choice of buying it.But I think this game is a must buy for Batman fans nonetheless of its undoings. Though I’d say, this game is not worth full 60$, wait till the price drops, or the best way is to rent it.So, I assume this review is helpful to you guys!