The introduction of The Secret of Monkey Island: Special Edition is a cut-scene on Melee Island with the main character and one NPC. They both discuss and the player learn what is the main goal of his character, this one wants to be a pirate.
This discussion is also used to give to the player the first objective of the player, find the Scum bar and talk to the pirates leaders over there. 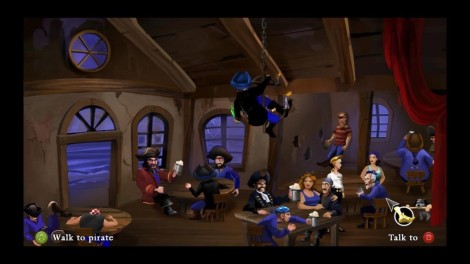 In the special edition the interface is almost inexistent, the actions possible change according to the placement of the mouse on the screen.

There is no in game tutorial, there is only a tutorial in main menu of the game telling how to make the basic interactions in the game. But the NPCs are there to give some hints for the players. For desperate players there is also a “hint” button (H by default) to help them in the progression.

The Secret of the Monkey Island is a game made for patient players, the 15 first minutes of the game are composed by researching and talking phases mainly. Though the beginning of the game is pretty playable despite the lack of tutorial.

The name of the main character is Guybrush Threepwood. The player has to click somewhere on the screen with the left button of the mouse to make the character move, the character also move in range before executing an action when the player click with the right button. We always see him from a ¾ point of view on the sides (right of left), we also see him from the back and from front. He has an animation of movement for every point of view.

At the beginning of the story, Guybrush mention that he is able to stay 10 minutes under water without breathing. 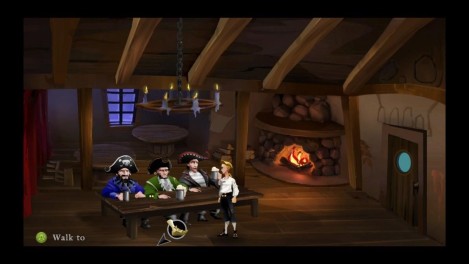 The NPCs of the game are useful for a lot of thing in Monkey Island. The player can talk to most of them, they for most of them have unique things to say. The player will generally need as many hints he can gets for the NPCs.

The NPCs have a lot of information to share with the players but some of them will require certain conditions according to their behaviors, driving the entire story. For example, the three pirate leaders could have make the main character a pirate from their first encounter but they require from the player to complete 3 quests and bring proofs for each of them.

Their appearance and animations are adapted to their background and different behaviors they have in conversations, for example the pirates in the game are generally drunk and so on when the player enter the bar he will see passed out pirates, one pirate one the candlestick and the others cheering their drinks.

The players can place his mouse of the NPCs and right click on him, the character will first put himself in range and the conversation will start (Except if the NPC does not have anything to say at this point of the game, in this case the character just say on the same screen something like “I don’t want to bother him” or any sentence justifying it). They are multiple type of conversations: 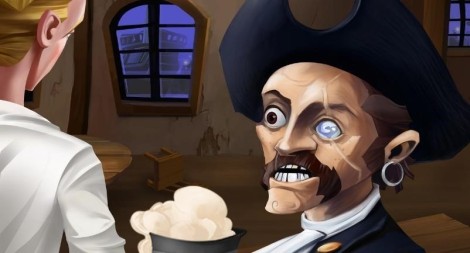 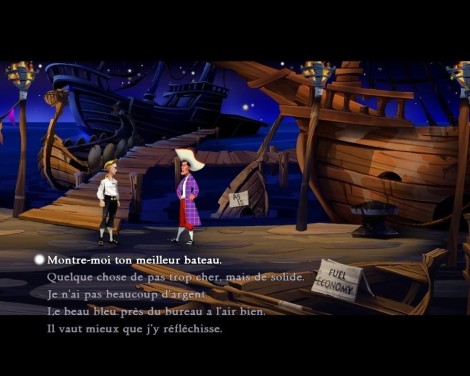 The only interface on the screen are the action possible with the mouse buttons. But the players have access to a verb menu (alt or V) in which all the actions are classified. The inventory of the player open when the player press the button “Use” of this menu (he can also press “I” to access it directly) 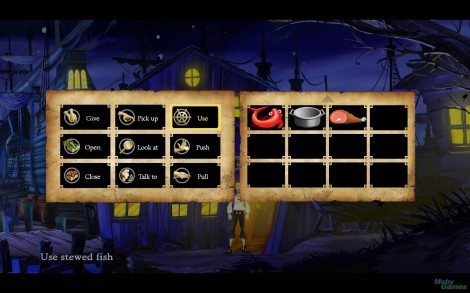 The player can use those button anywhere in the screen, if those do not work the character will warn them with a short sentence.

The puzzles are a bit everywhere in the game, in the environment, in a conversation, on the map etc…In the 15 first minutes of the game there are only short enigmas to solve, but those introduce the player to bigger challenges.

The enigmas are multiple, some requires items, some require to talk to the right people and say the right thing or others require exploration to be solved. The system of hints is there to help the impatient players or facilitate the task for the hardest challenges. Usually solving those enigmas unlock the progression of the story, some NPCs reward you with a critical item or share precious information about your quest.

Sometimes an enigmas can be solved with numerous ways but sometime also certain ways require certain conditions and if the player makes an error (like bad choices), he will usually have to solve it with the more usual way.

The game takes place on the melee island, famous for being the land of the pirates. The character came to that place to accomplish his dream, becoming a pirate. This implicate to lead a seduction campaign with the pirate leaders. The place seems also inhabited by ghost pirates trying to take control of the island. The player will have to complete his quest and handle those ghosts.

When the player get out of those special places he sees his character on a huge map  representing the island, he can moves (by clicking) on it until he reaches the next special place. 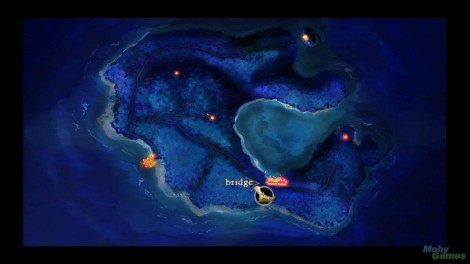 The scenes are accompanied by soft music changing according the environment to accentuate the different ambiances. For example, the ambiance of the bar is accompanied by Caribbean music and the usual noise of the bars, people shouting, fighting etc.
Some elements of the game are only animated for ambiance purposes, like this character on the candlestick turning with a beer in this hand, the player can’t talk to him, he is just there to show the mess in the bar and it works. 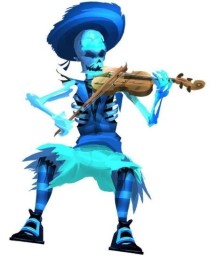 The gameplay general of this remake is really pleasant, the interface is short but efficient, the graphical style is a success and the different animations are adapted to it. The game is challenging while entertaining you, even make you laugh to the numerous jokes, references in the game. The game is re-playable since the enigmas can be resolved in multiples way and after 15 minutes I really want to go further in the game. It is hard to find any cons to the game, the only default you could find would be the rhythm of the game which is pretty slow, but this is the intention. The game is made for patient players, and it is possible than some players would get bored of the long research session, but even for them the new hint option is a must have.

One response to “The Secret of Monkey Island: Special Edition (PC) – Game Analysis”