Ironic to show this right after my previous post. But I think my previous post still stands, because this method that I’ve brought up for myself might totally change in future, or it might not even be the right way to do things. But the point is – It’s my way.

Mentioned below are the sequence of steps, which I usually follow for bringing a concept into a developed prototype.

Our prototypes end when we reach a level of fidelity we want the feature / concept to be showcased with to the investors. And from there after, since I’m a game designer, we coordinate with different branches of development to bring the prototype to life, by teamwork, directly to the players hands. 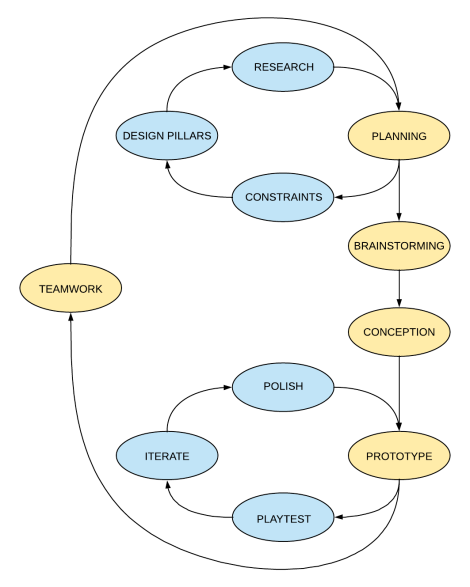 To note – these stages are not usually completed in succession. There might be a bit of flexibility on how I follow these steps. I think it’s totally dependent on our requirements for the project.

Again, please try and understand that this is my generic process, and these following steps vastly differ depending on my line / type of work.

The progenitor of the project, which decides our path for a limited period of our life. This is where the things I said in my last post come into action. You need to research / have enough knowledge in tackling the idea you want, in the best way possible.

Anything to everything helps in this phase, but its objective is to slowly mold the idea into something imaginable, & playable.

This phase is always enhanced by having boundaries which we can see, and overcome to better the gameplay experience. And for this, I usually follow some pre-determined constraints, some design pillars holding the constraints, and strong research to evaluate and compile them into the development process.

A constraint could be as vague as saying “Use a phone”, or it could be down to the detail by saying only “Portrait-gameplay”. Its totally fine however they are, but in my case, they mostly act as my ground and sky for how much freedom I have with the concept.

Too much freedom can only lead to troubles at points; We should be very careful to avoid these scenarios. These should only be made to bring out the very best of our ideas.

The most faithful, and important step I follow by heart when designing a game. This step is how I evaluate every decision I or any other designer makes towards the concept.  It could range from the player emotions, the interaction with the device, or with the ideology / theme behind the concept itself.

A crude example could be – “Hey! is it a good idea to make this level linear?” Sure! If it does align with our design pillars, linear is good, yes.

This is another front where we gather and evaluate our ideas to common trends. All of this is simply done because you never know whatever you did, whether it’ll work-out towards gathering an audience or not.

And that is the mission. To be able to garner attention for people to play what you did. This depends on everything that was used to craft the game, and this is where we know ‘how to actually craft the game’.

Small thing to note – you shouldn’t be bound by this step to follow certain established techniques / systems. It should only act as a tool of reference, not a bible you follow by heart.

Contrary to popular belief, this is where you already have enough resources in your hand, and this is when you try and craft something imaginable / playable. Utilise your constraints, design pillars, and your research – to brainstorm the potential of the concept.

This is important because, potential investors would wish to know how this concept could stand-up on its own feet at development time. There might be many problems that could arise… But this step needs to eradicate said problems, and establish ground work on, again, the potential of the concept.  In terms of gameplay, and the possibilities of the concept.

You have everything in your hand, and this is when you put them into work. Enough research, and data – it’s just about forming an idea into an eventual prototype now.

You had the idea of a shooter game? with space guns? Now define what is that gun – does it have ammo? Then what type of ammo and how much? Or is it not a value? Or is it a cooldown based gun? Refine & reform everything from the idea into a concept, which is complete and ready to implement into the prototype.

You can feel and guess your concept by yourselves to an extent. But the more you do, the more you stray away from it. Some people might disagree with this, but this is why quality assurance exists.

What you may think, might not always be the right way, or even the working way (Stated by how saturated you get from the concept itself); So you need to get into the loop of playtest, iteration, and polish – to perfect your craft!

As stated, play the game!

But it’s not you who should be doing it. It’s supposed to be played by someone who you think is your target audience or your demographic. Or actually, to fool-proof your concept, it could even be your family members or anyone who doesn’t know anything about video games.

The purpose here is to understand their inconveniences, problems, or their happiness and fun! We need to critically analyse them without any prejudice.

Once you understand the feedback from the play-test, it’s time to selectively implement these changes into the prototype.

See how the changes affect your game, perform play-tests again, something big needs to be changed in the process? You better take a decision on it quick and continue the process.

For most people, iteration is something disgraceful and unwanted… Because for the most part, things are never in their control from here. They need to react and respond to required changes appropriately.

But it is also necessary to understand… Game Design is an highly iterative process.

Everything matters. You feel the solution to something is by moving an object by an inch? Could totally be the case. It is your determination to keep polishing something to perfection that matters in this step.

Sometimes, you don’t even need to do anything for a problem. Also, many problem cases never arrive due to how play-testing is handled, and by the nature of the play-testers themselves.

But anyways – You always, always, should try and improve your concept in any positive way possible. At least until the time runs out for the project… And that is when your quest ends for obtaining something playable and beautiful in your hands!

This step didn’t fit anywhere in my loop. Because this is something you need to have at ever step in my process. All the time.

I believe a concept is an amalgamation of different people coming together to create something they love. If this is missing… It is extremely hard to go anywhere from there.

Finally. It’s a bit of a long one this time. Hope you had fun reading this.

If you followed or understood this process, this is when you would have something in your hand to showcase. Either it be knowledge you gained from this post, or be a product itself.

I’ll be coming up with more of  kinds of game design posts explaining more about its process in general.

Hope you have a good day.